Ray is a retired NFL player who starred as one of the greatest linebackers with the Baltimore Ravens for 17 years.

Ray is a shining example of what it means to a true champion. His work ethic, attitude and dedication show up in all he does.

We hope today’s collection of Ray Lewis quotes get you hyped and ready for the day!

1. “What’s the difference between you and the man sitting beside you? It’s the 1%. In my business, only 1% makes it. If everyone had the same dream, only 1 will make it from this crowd. Who will be that one?” – Ray Lewis

2. “What if we do the impossible? If I miss anything about career, it will be to listen to what people say you can’t do and then go do it.” – Ray Lewis 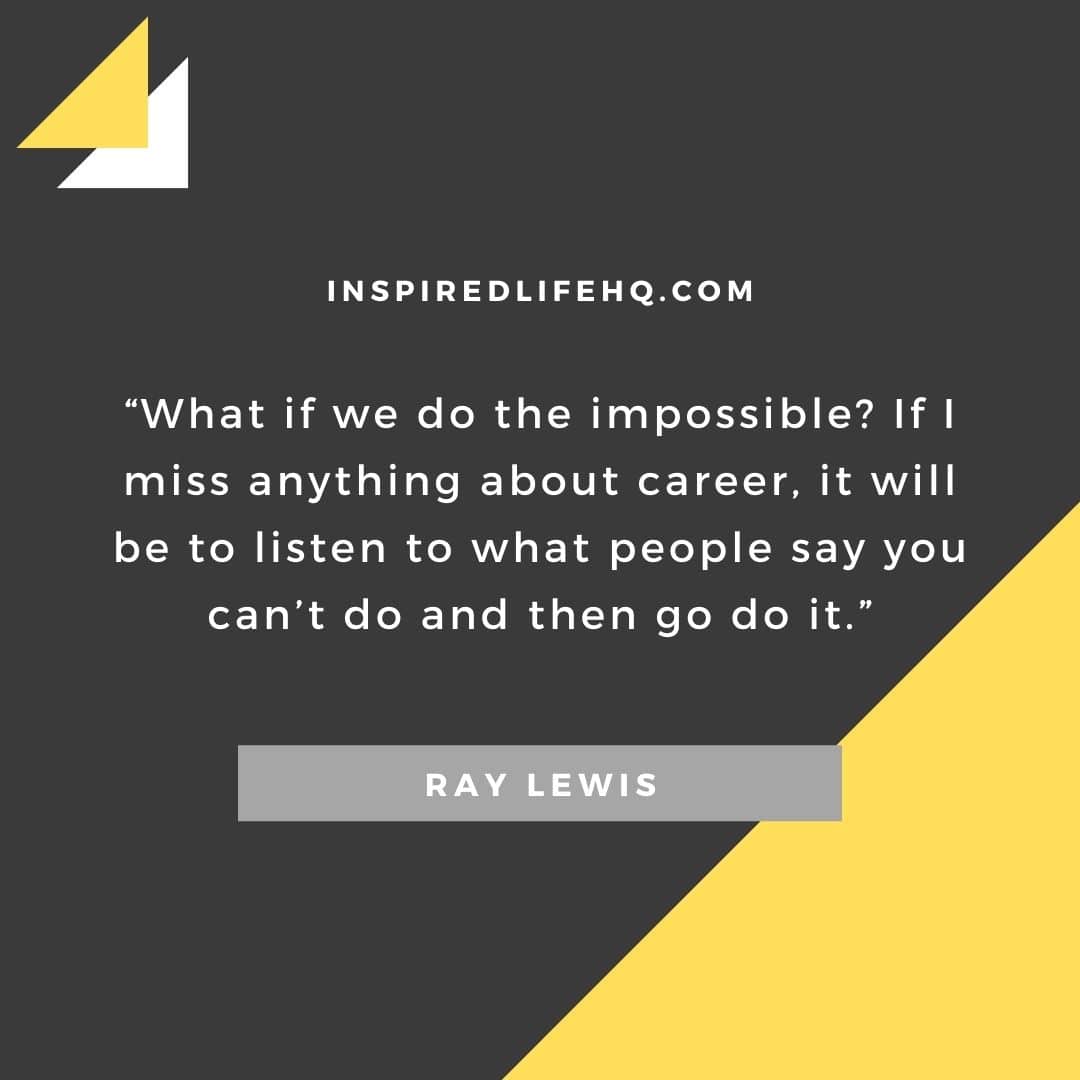 4. “Wins and losses come a dime a dozen. But effort? Nobody can judge that. Because effort is between you and you.” – Ray Lewis

5. “The greatest opportunity in the world is found here today… We already know what yesterday has got for us. It’s already gone. Tomorrow, too far away. What about right now!” – Ray Lewis

6. “Bottom line is your body is a temple, and you have to treat it that way. That’s how God designed it.” – Ray Lewis 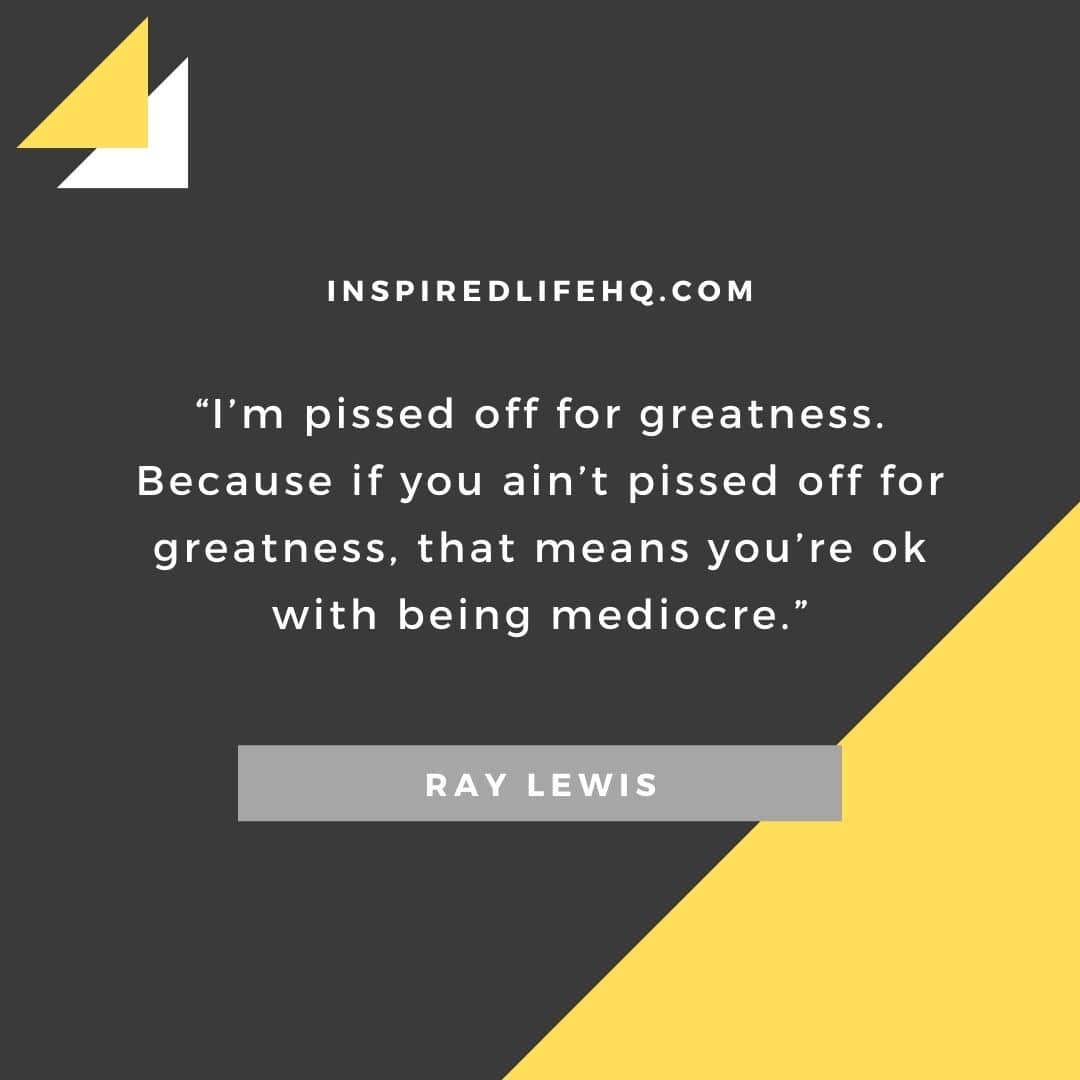 8. “Before anything great is really achieved, your comfort zone must be disturbed.” – Ray Lewis

10. “The hardest thing to do is work hard when no one is watching.” – Ray Lewis 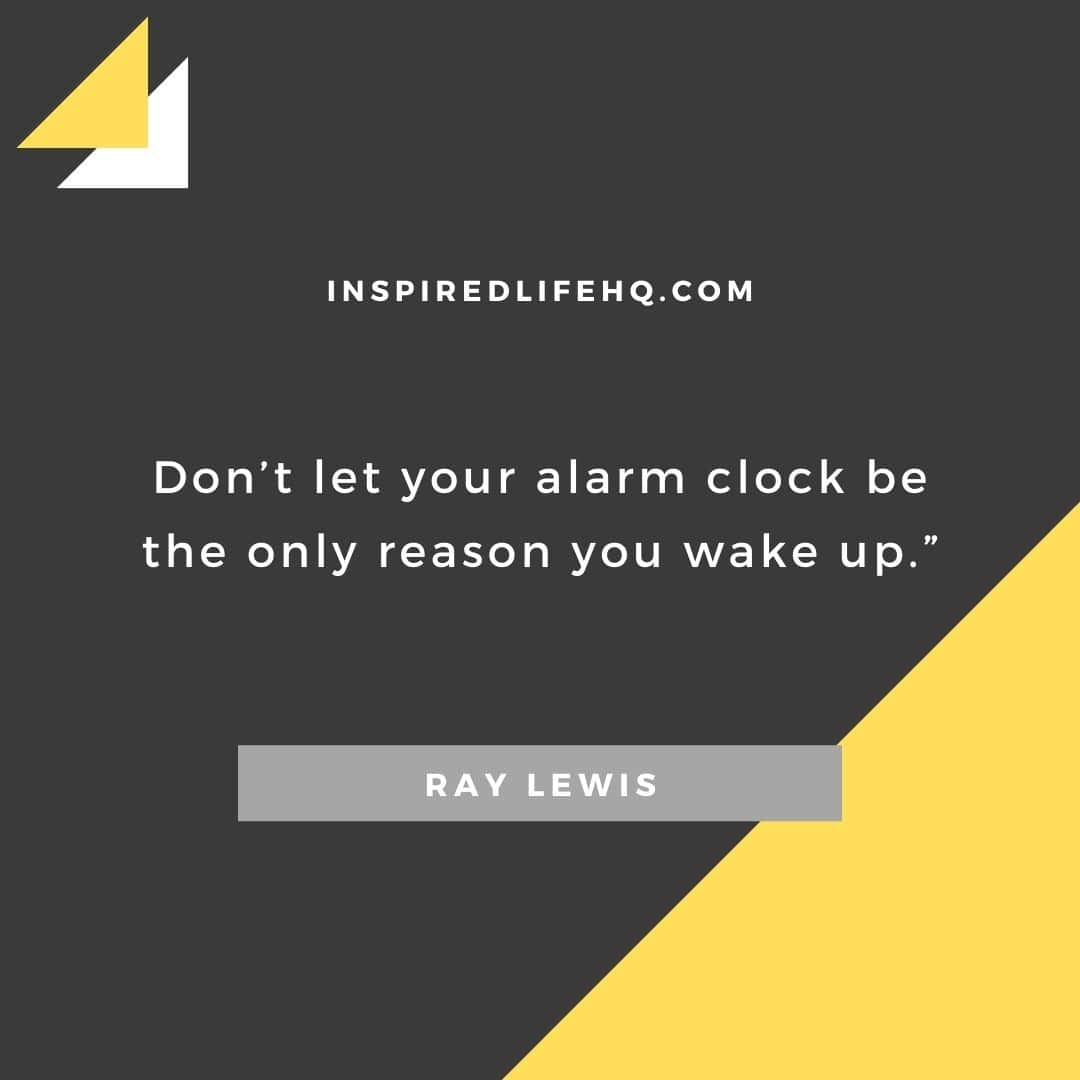 12. “No matter the circumstances that you may be going through, just push through it.” – Ray Lewis 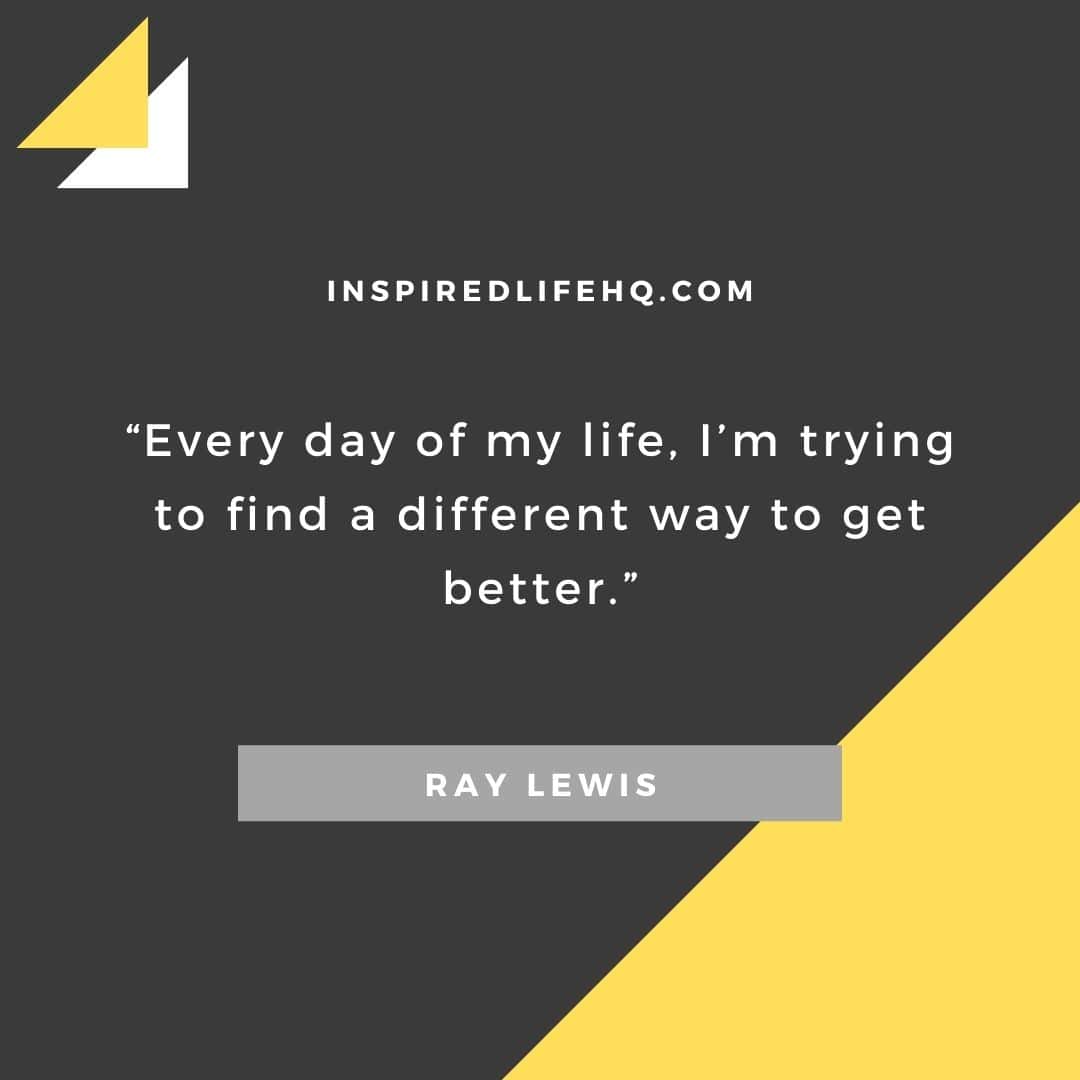 16. “You gotta be hungry for it; ready to put everything into it. EVERYTHING! Every second. You have to be the first one to the line. That’s how LEADERS are born.” – Ray Lewis 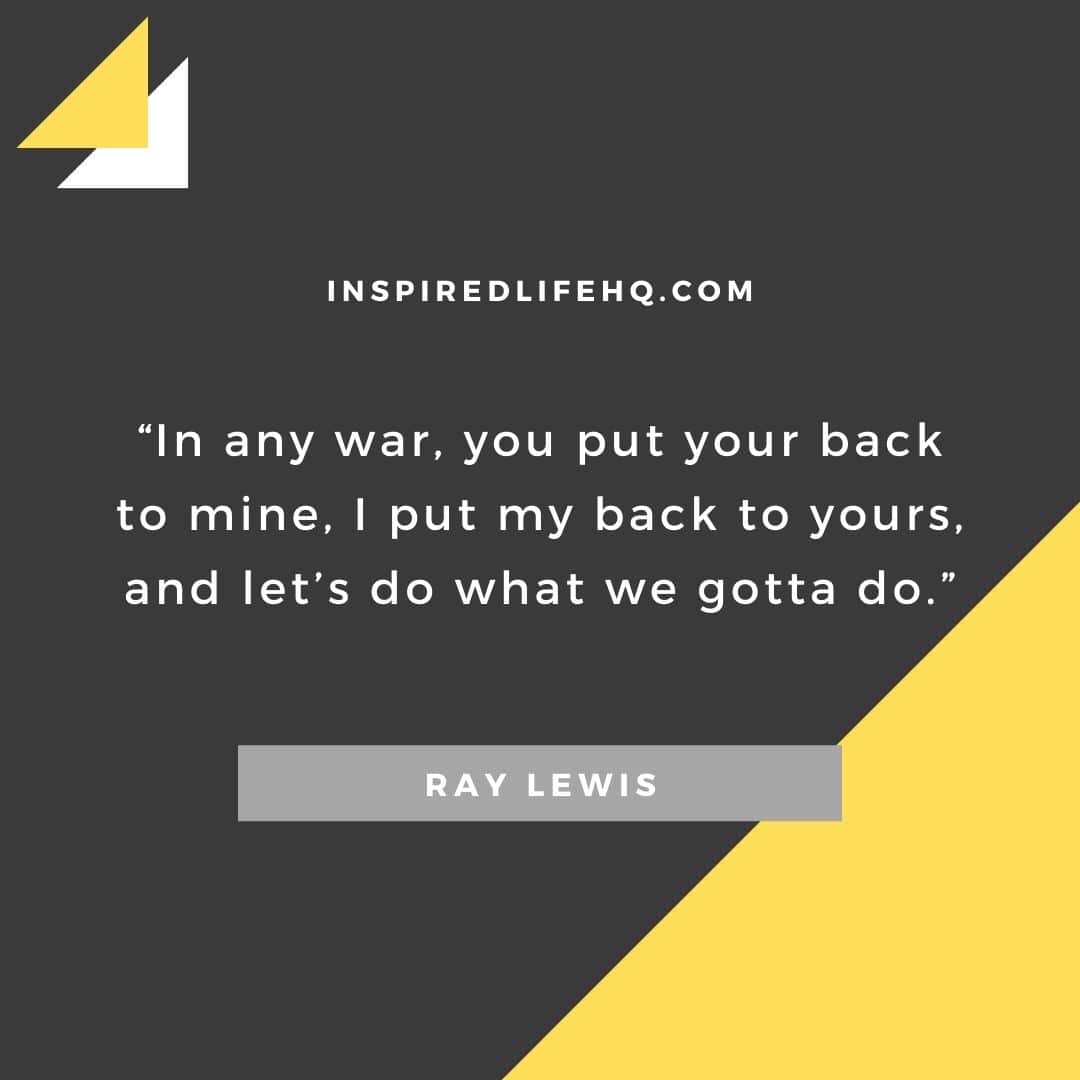 21. “It don’t matter about me. What matters about me is sacrificing for you, for the ultimate goal, which is us.” – Ray Lewis

22. “Greatness is a lot of small things done well. Day after day, workout after workout, obedience after obedience, day after day.” – Ray Lewis

23. “You gotta block out your time; you got to have complete focus on what you’re trying to get done.”

24. “If tomorrow wasn’t promised, what would you give for today?” – Ray Lewis

26. “One thing about God’s will, you can never see God’s will before it happens. You can only see at the end of it.”  – Ray Lewis 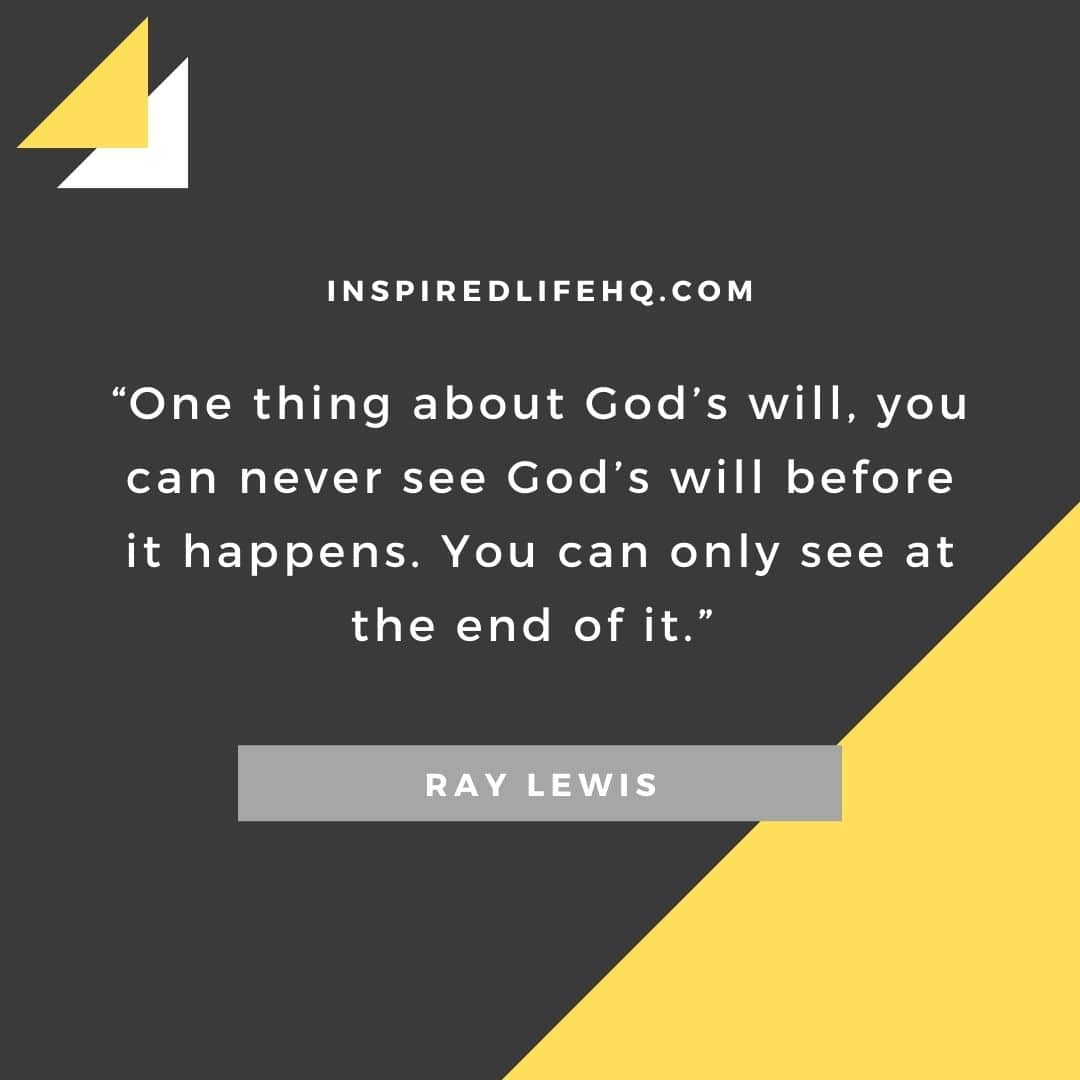 28. “Man doesn’t dictate what you do or how you do it. If you believe in God, believe in God; have your faith in him. That’s where my faith lies.”  – Ray Lewis

29. “Satan’s biggest fear is for you to become everything that God created you to be. This is why he has tried everything to make you lose focus…..DON’T.”  – Ray Lewis

30. “Stop worrying….stop stressing. When you get on your knees for God, he will stand up for you!”  – Ray Lewis

34. “I honor God that much in the way I play. That’s why I never believe in getting tired. I don’t even know what that word means.”  – Ray Lewis 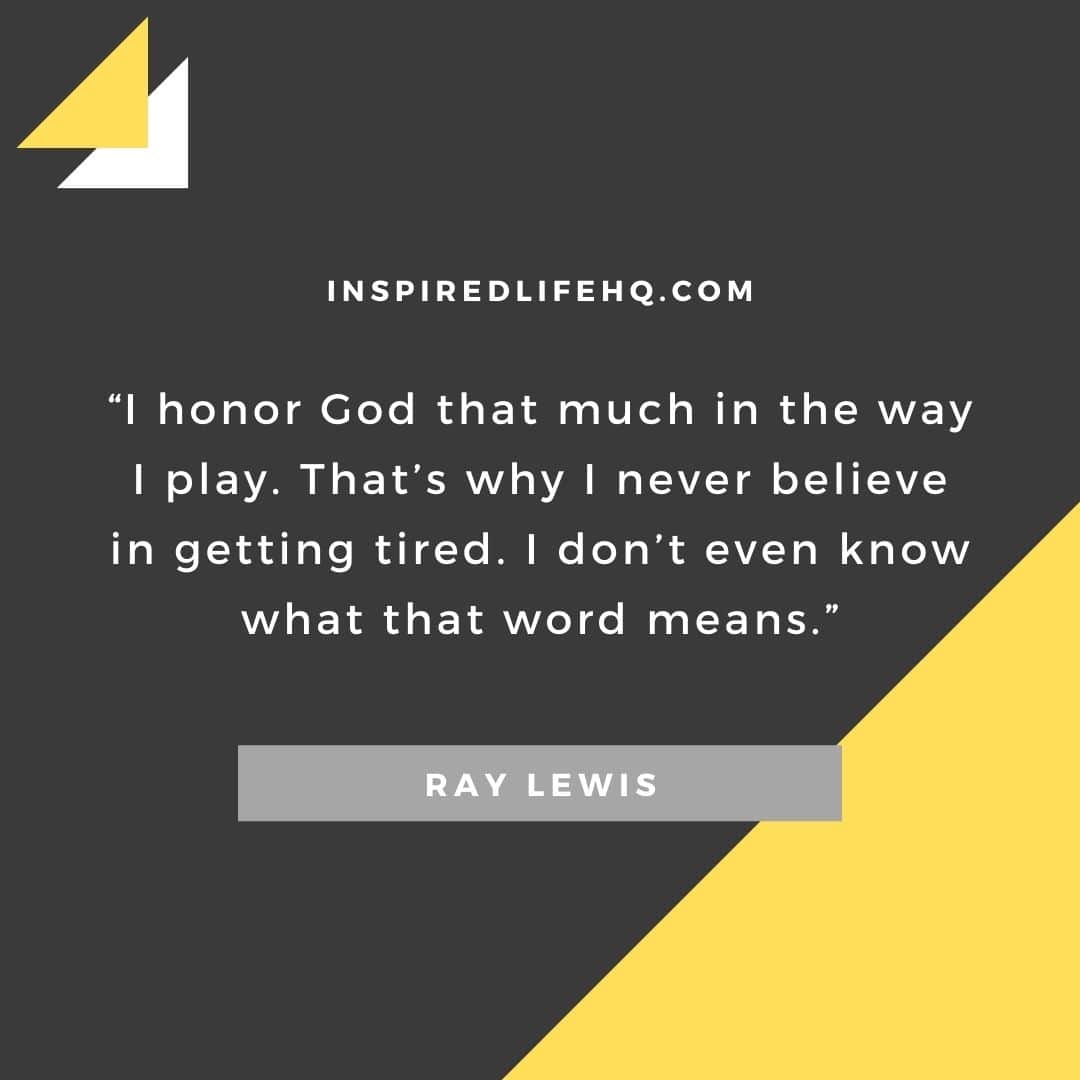 35. “Before anything great is really achieved, your comfort zone must be disturbed.”  – Ray Lewis

36. “It’s not about perfect. It’s about effort. And when you implement that effort into your life….Every single day, that’s where transformation happens. That’s how change occurs. Keep going. Remember why you started.”  – Ray Lewis

37. “I’ve got kids that are always watching and I taught them to always finish something you started.”  – Ray Lewis 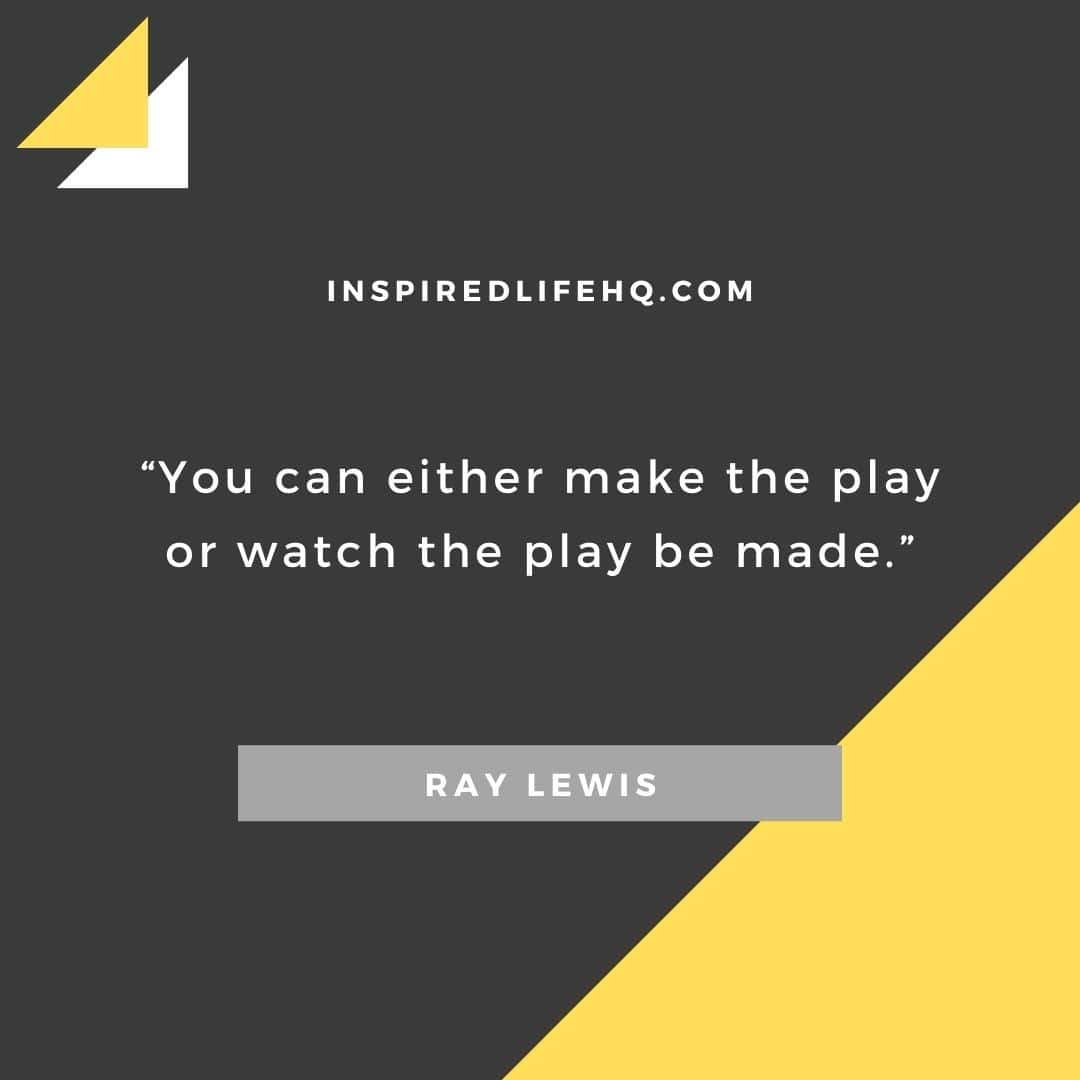 39. “I figured something out. And it is no secret what I figured out. Whatever the majority of people were doing, I found myself doing the opposite. I wanted to chase something great.”  – Ray Lewis

40. “The only way to defeat pain is to recognize pain exists.”  – Ray Lewis

41. “We’re in a tough place in this world. There are a lot of kids giving up very early. Scripture says it takes a village to raise one child, and that’s what these coaches are going to have to go back and understand.”  – Ray Lewis

42. “Some people think that to be strong is to never feel pain. In reality, the strongest people are the ones who feel it, try to understand it, accept it and get through it.”  – Ray Lewis 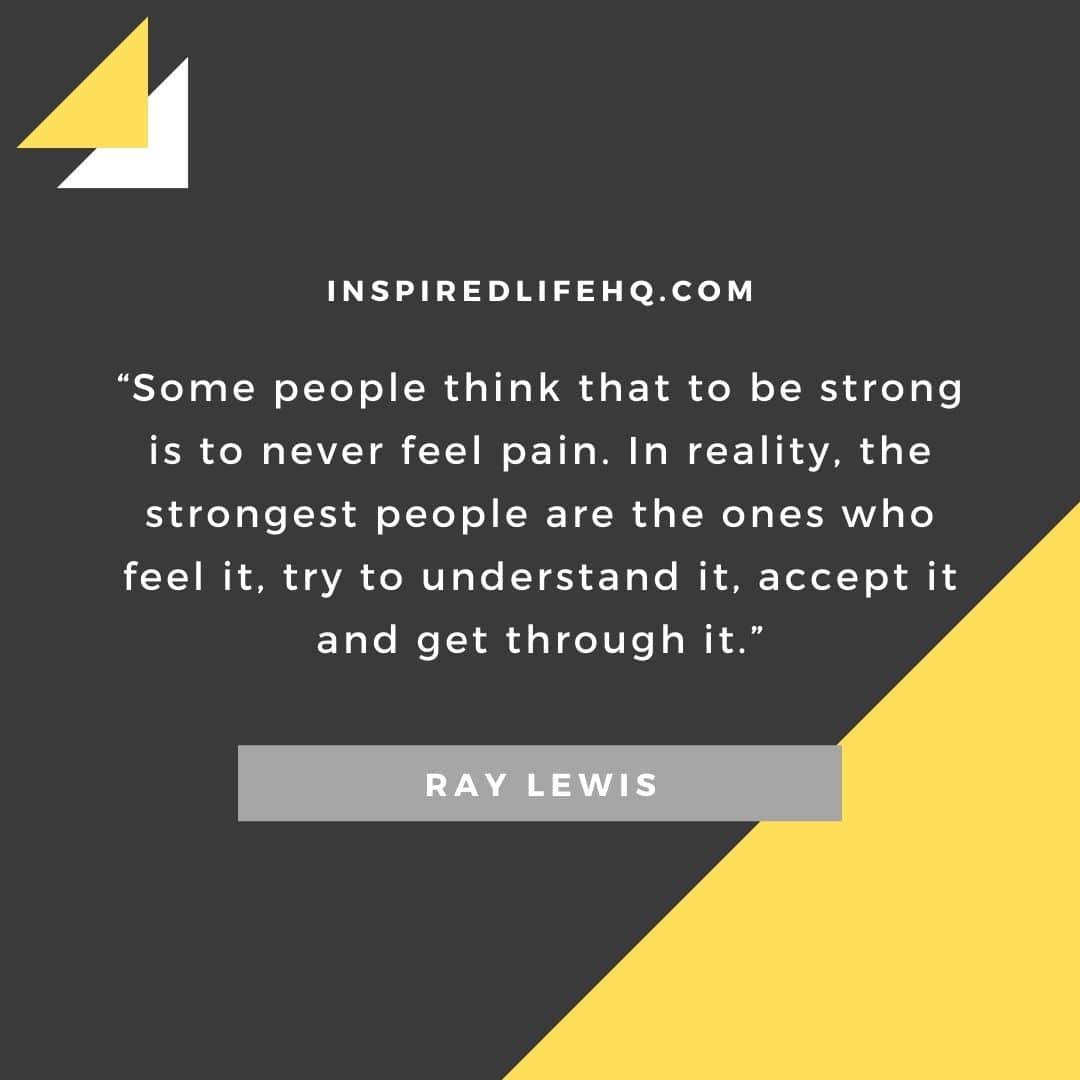 43. “Appreciate those who love you, help those who need you, forgive those who hurt you and forget those who left you.”  – Ray Lewis

44. “When something goes wrong, smile cause there’s always a next play.”  – Ray Lewis

45. “One of the most dangerous things you can do is believe someone’s opinion of you.”  – Ray Lewis 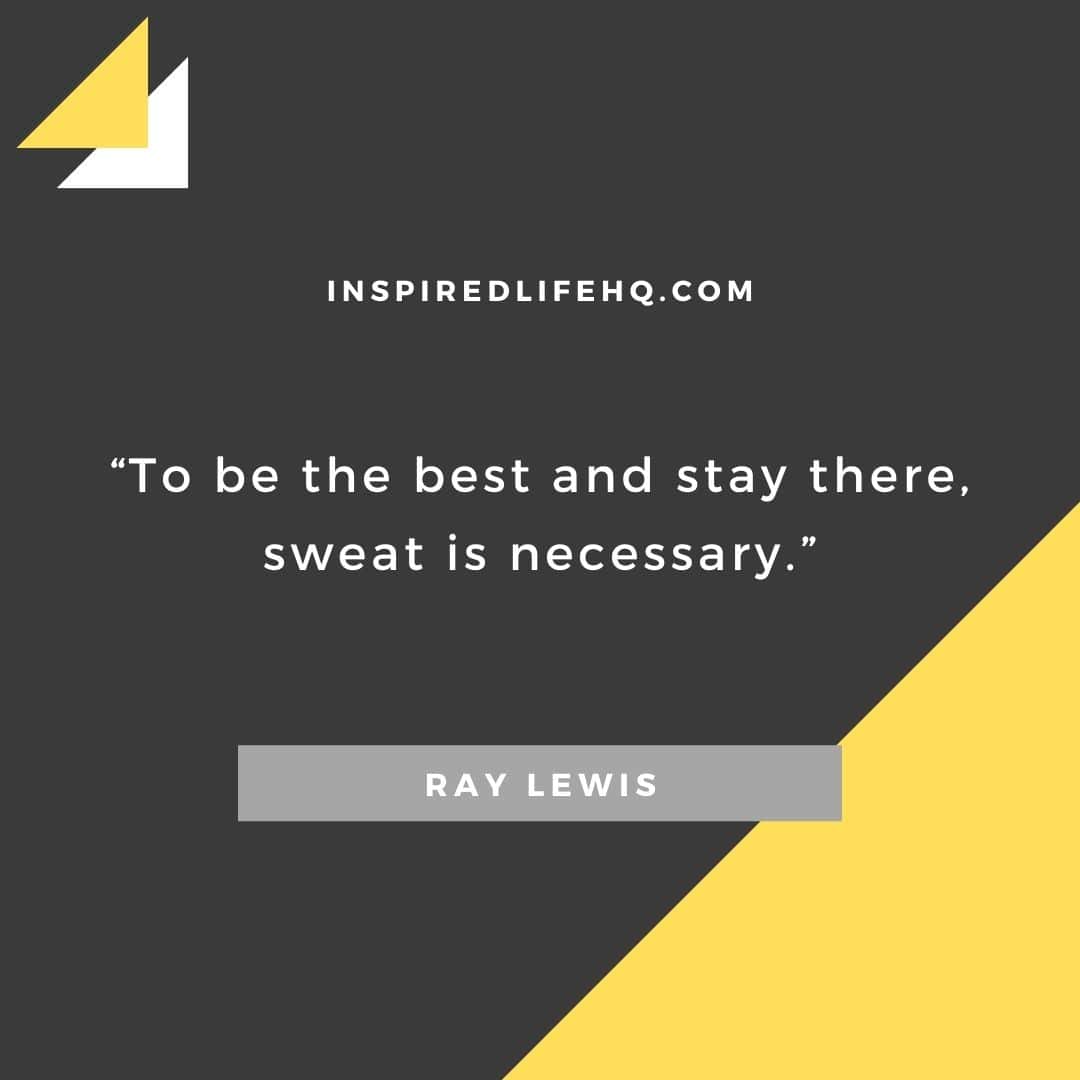 47. “I already believe I am the best linebacker in the game. Now, I have to show one more thing? That I am the most dominating, influential person in the game and the best football player to ever put on a pair of cleats.”  – Ray Lewis

Which Ray Lewis quotes were your favorites?

Ray Lewis has an abundance of motivation. He’s always been the leader on and off the field, but we can now gain value from his wisdom through these motivational quotes.

His words will inspire you to push harder than ever before in any goal you’re trying to achieve. It doesn’t matter how many times you fall down as long as you keep getting back up again until your dreams come true.

Keep going and never give up! Let us know in the comments which quotes resonated with you the most.