In today’s collection of champion quotes, we’ll explore some of the best words of wisdom from top champions throughout history for you to take these words as guidance and motivation to achieving your own success.

The world’s most successful people are champions. They don’t give up when things get tough, and they keep fighting for what is important to them. In order to be successful in any endeavor, one must have an attitude that is consistently positive and optimistic.

Not only that, but you must also know that anything worth achieving requires hard work, dedication, sacrifice and unyielding persistence.

Heart of a Champion Quotes

1. “Never underestimate the heart of a champion.”

2. “I don’t count my sit-ups. I only start counting when it starts hurting. That is when I start counting, because then it really counts. That’s what makes you a champion.” – Muhammad Ali

3. “A champion isn’t made of muscle; a champion is made of heart.” – Liang Chow 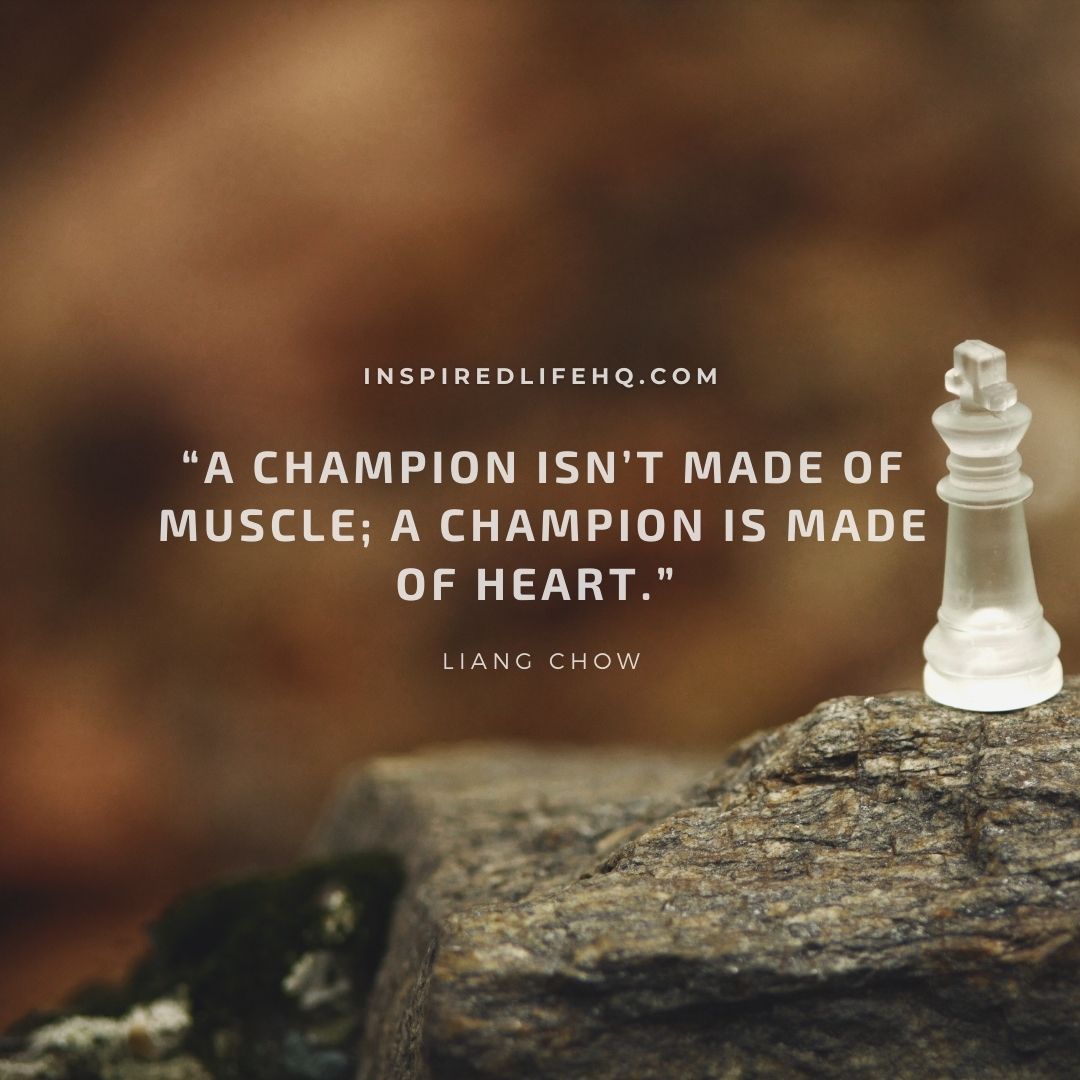 4. “The quality of a person’s life is in direct proportion to their commitment to excellence, regardless of their chosen field of endeavor.” – Vince Lombardi

5. “A true champion can adapt to anything.” – Floyd Mayweather Jr.

6. “In the world there are believers and then there are non-believers. For all of you non believers out there, I have something to say to you…never underestimate the heart of a champion.” – Rudy Tom Johnavich

8. “I hated every minute of training, but I said… Don’t quit. Suffer now and live the rest of your life as a champion.” – Muhammad Ali

9. “Everyone has the fire, but the champions known when to ignite the spark.”

14. “Champions keep playing until they get it right.” – Billie Jean King

15. “Every champion was once a contender that refused to give up.” – Rocky Balboa

17. “The heart of a champion is not a light switch that goes on and off when someone’s watching. It’s like a sun that always burns.” – Said Manoj

18. “She has the heart of a champion. She just refuses to lose.” – Mike Helmer

19. “The heart of a champion beats to a different drum.” – John Di Lemme

20. “Champions believe in themselves, even when no one does.”

21. “The real champions in life are so humble and gracious. They just continue doing what they do without all the posturing.” – Denis Waitley

22. “A great man is always willing to be little.” – Ralph Waldo Emerson

26. “I need to remain humble, stay disciplined and keep training. That’s how I will continue to be a champion.” – Andy Ruiz Jr.

27. “If my mind can conceive it and my heart can believe it – then I can achieve it.” – Muhammad Ali

29. “Gold medals aren’t really made of gold. They’re made of sweat, determination, and a hard-to-find alloy called guts.”

31. “I’ve grown most not from victories, but setbacks. If winning is God’s reward, then losing is how he teaches us.” – Serena Williams

32. “Be a humble champion and create visible momentum for the value you deliver to the team.” – Dave Hollis

33. “Every person that you meet knows something you don’t; learn from them.” – H. Jackson Brown Jr.

34. “Real genius is nothing else but the supernatural virtue of humility in the domain of thought.” – Simone Weil

36. “Humble on the outside, confident on the inside.”

38. “The biggest challenge after success is shutting up about it.” Criss Jami

39. “As a champion, you will have the opportunity to see what God sees and your view of this race will become clearer to you.” – Dr. Beverly Crockett

41. “To be a champion, you have to see the big picture. It’s not about winning and losing; it’s about every day hard work and about thriving on a challenge. It’s about embracing the pain that you’ll experience at the end of a race and not being afraid.”

43. “Champions rarely talk. They just perform and the world around them talks.” 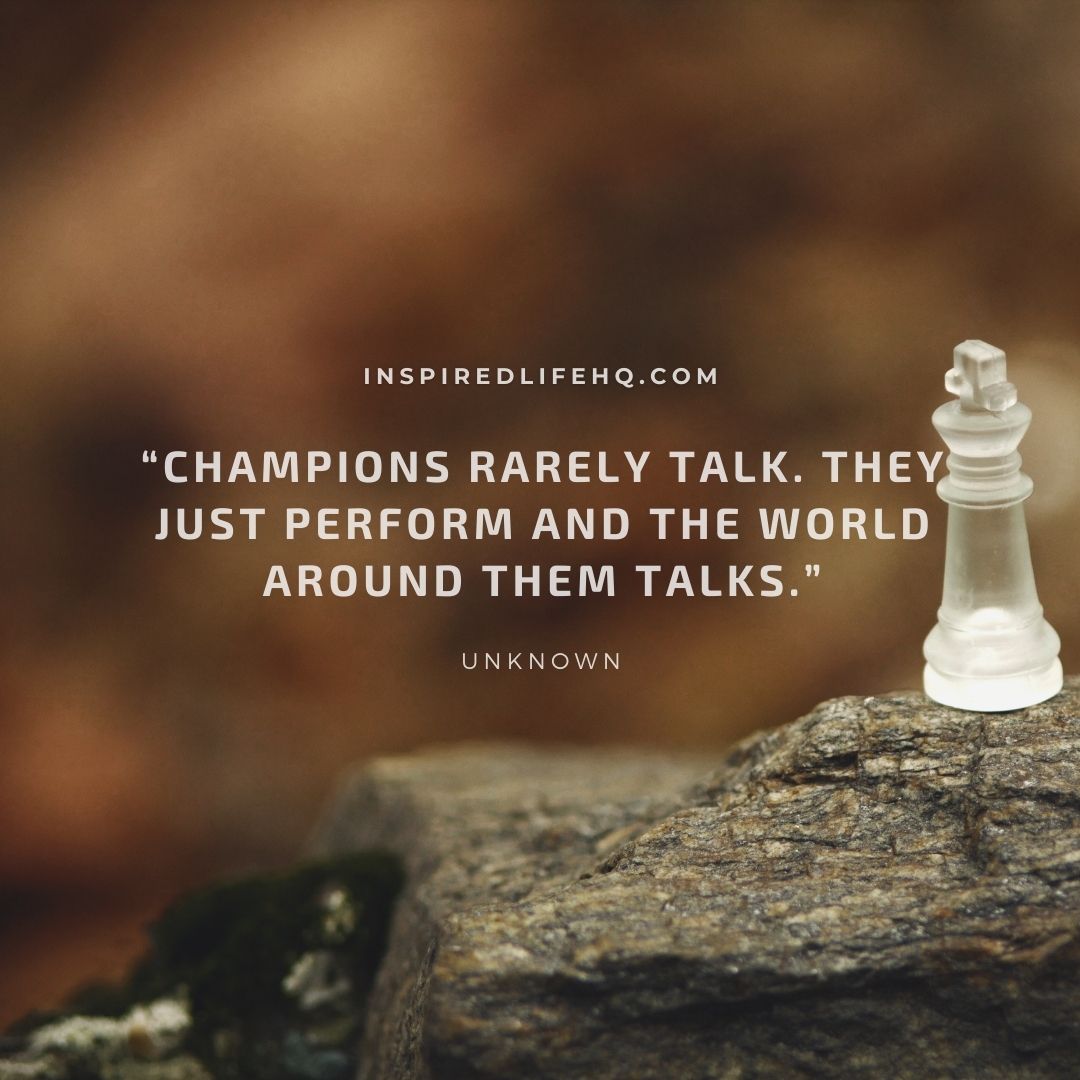 44. “A Champion is defined not by their wins but by how they can recover when they fall.”

47. “Champions do not become champions when they win the event, but in the hours, weeks, months, and years they spend preparing for it. The victorious performance itself is merely the demonstration of their championship character.” – T. Alan Armstrong

48. “What does it take to be a champion? Desire, dedication, determination, concentration and the will to win.” – Patty Berg

50. “To be a champion, you have to believe in yourself when no one else will.” – Sugar Ray Robinson

51. “Champions aren’t made in gyms. Champions are made from something they have deep inside them. A desire, a dream, a vision.” – Muhammad Ali

52. “A champion is someone who has faith and dedication and doesn’t let obstacles stand in the way.”

53. “If you want to be the best, you have to do things that other people aren’t willing to do.”

56. “Never be ashamed of a scar. It simply means you were stronger than whatever tried to hurt you.”

58. “There are always new, grander challenges to confront, and a true winner will embrace each one.” – Mia Hamm

59. “Champions are made by their passion and persistence.” – Agunloye Oyerinde 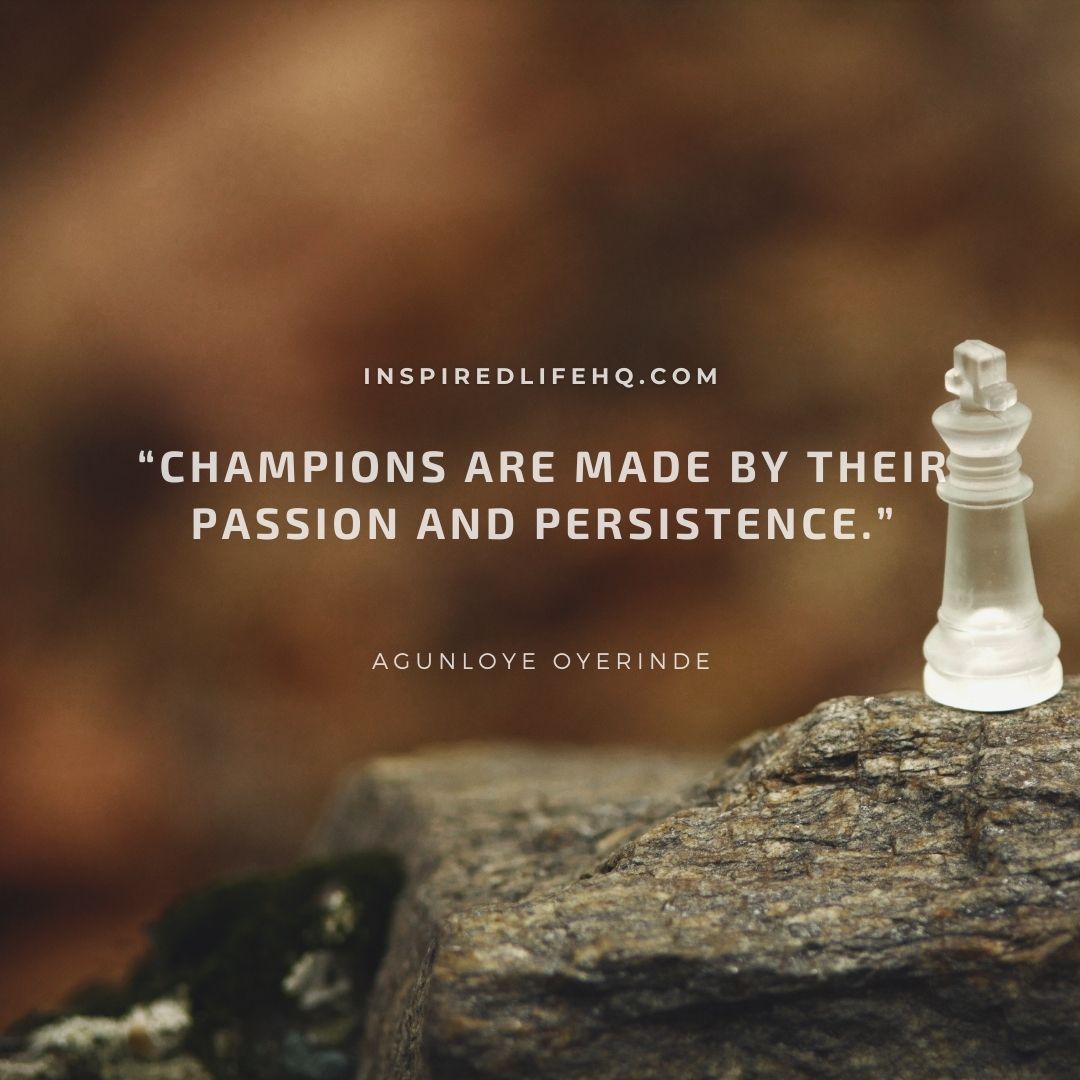 If you are enjoying these quotes, feel free to check out our John Wooden quotes collection for more motivation about winning.

61. “A true champion will fight through anything.” – Floyd Mayweather, Jr.

63. “Hard days are the best because that’s when champions are made.” – Gabrielle Douglas

65. “If people are doubting how far you can go, go so far that you can’t hear them anymore.” – Michele Ruiz

66. “True champions aren’t always the ones that win, but those with the most guts.” – Mia Hamm

67. “In life, there is no such thing as impossible; it’s always possible.” – Venus Williams

68. “You were born with the ability to change someone’s life, don’t ever waste it.”

69. “What makes a champion is not how elegantly you start, but how strongly you finish.” – Robin Sharma

70. “I always believe if you’re stuck in a hole, and maybe things aren’t going well, you will come out stronger. Everything in life is this way.” – Roger Federer

71. “He who is not courageous enough to take risks will accomplish nothing in life.” – Muhammad Ali

72. “There’s always the motivation of wanting to win. Everybody has that. But a champion needs, in his attitude, a motivation above and beyond winning.” – Pat Riley

73. “We cannot become what we want to be by remaining who we are.”

75. “You cannot be a winner without maturity and consistency.” – Marco Silva 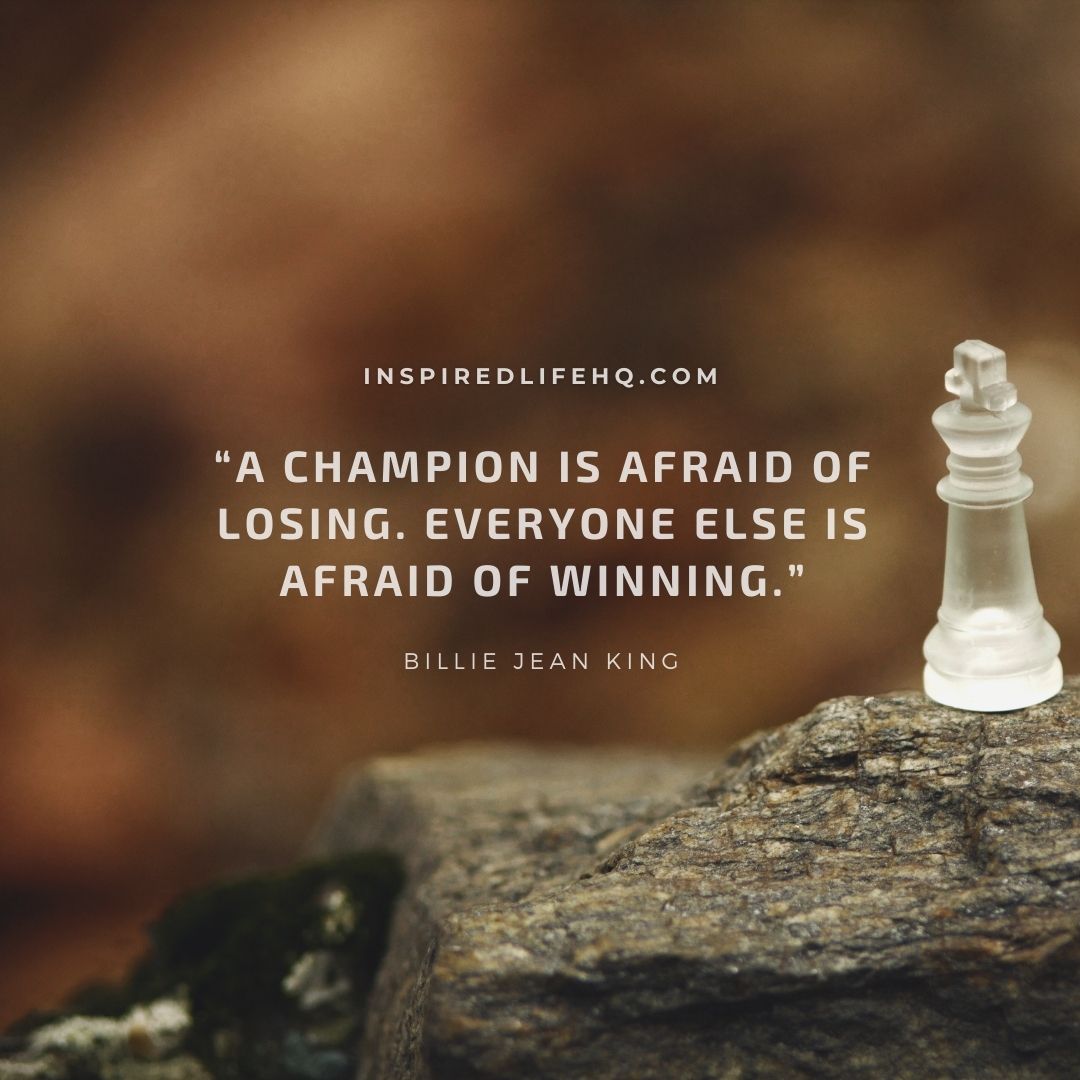 77. “The road to Easy Street goes through the sewer.” – John Madden

78. “There may be people that have more talent than you, but there’s no excuse for anyone to work harder than you do.” – Derek Jeter

80. “You are the only one who can limit your greatness.”

Which Champion quotes were your favorite?

Winning is not a destination, it’s an attitude that you carry with you. You can be successful in all aspects of your life if you have the right mindset and work hard enough to achieve what matters most to you.

We hope these champion quotes have been a source of inspiration for you today. Which quotes resonated with you most? Let us know in the comments below!